The Lion, the Witch and the Wardrobe, West Yorkshire Playhouse theatre review

Went to see this last night with my husband and son.  With magical puppetry, superb aerial artistry and imaginative props, this was a dark take on the classic 1950s tale by C. S. Lewis about the four Pevensie children evacuated to the country during the second world war.  An enchanted wardrobe provides entry to the land of Narnia, where talking animals are held captive in permanent Winter by the evil White Queen.  Can the two daughters of Eve, Susan (Patricia Allison) and Lucy (Cora Kirk) and two sons of Adam, Peter (Michael Jean-Marain) and Edmund (John Leader) break the spell?

The audience sitting in a circle around the stage helped to add a Cirque du Soliel feel to the production and the 21-strong cast is directed by Sally Cookson (puppetry directed by Craig Leo, aerial direction Gwen Hales, movement by Dan Canham and fight directors Rachel Brown-Williams and Ruth Cooper-Brown). Carla Mendonça is deliciously cruel as the White Witch, though some of her scenes were stolen by Amalia Vitale who plays Bog one of her hilarious minions, and Iain Johnstone is a commanding Aslan.  All four actors playing the children portray the boundless enthusiasm and energy of childhood well and their Leeds accents make them relatable.  Talking of energy, Ira Mandela Soibhan's portrayal of  Maugrim was scarily lupine.

Tickets are still available to buy as the run doesn't finish until Saturday but best be quick. 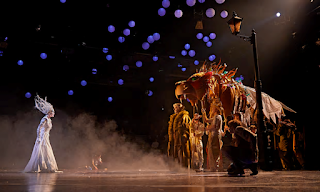 More Information on The Lion, The Witch & The Wardrobe

C.S. Lewis’ classic tale leaps off the page and on to the stage this Christmas… The Magic awaits!

Join Lucy, Edmund, Susan and Peter for the most mystical of adventures to a faraway land where it’s always winter, but never Christmas…

Wave goodbye to wartime Britain and say hello to a talking faun, an unforgettable Lion and the coldest, cruellest white Witch…

Following the magically inventive Peter Pan at the National Theatre and the critically acclaimed sell-out tour of Jane Eyre, Sally Cookson explores this timeless story of magic, mischief and mayhem in a spellbinding new production.
“a theatrical miracle”  The Times

Enter Narnia as The Lion,The Witch & The Wardrobe, WYPHs co-production with Elliott & Harper Productions and Catherine Schreiber, takes to the stage. 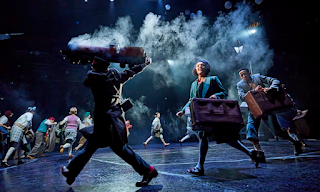