The Cleckheaton Writers Group met last night and M, N, A and myself were in attendance, M, J & P having passed on their apologies.

The minutes of the last meeting were agreed and M informed the group that he had been working on a new idea since the last meeting and he had brought it along to share with the group.  A had been working on poems since last time and he had entered the one he had brought to share with the group into the Wergle Flomp Humour Poetry competition (details on previous post).

We started the feedback session with the work that M  had brought along with is as yet untitled and it is the beginning of random ideas.  All the members enjoyed the piece, it was in the style of Lovecraft and read like a diary of narration.  M is not sure what to do with it and the group brainstormed ideas, delving into the world of Lovecraft and fan fiction.  The group wondered whether the professor who is leading the main character on a certain course, is setting a trap and M agreed that he had been playing with the idea of letter the reader think that the professor was someone you think of as an ally, who in reality has the worst of intentions.  A discussion followed about films such as Re-Animator (a comedy horror available on Netflix) and Hellboy.

A then shared his poem The Defender with the group, which was an amusing tale of workplace enmity.  A revealed that he has been getting into poems since joining a group on facebook where feedback is given and it is satisfying to know that he is being read and enjoyed on 4 continents.  Having never tried poetry before, he is enjoying playing with it.

A then shared a 805 word short story he described as a creation myth piece.  Again it was humorous and took the reader down a certain path of expectation, only to reveal a different course in the second section of the story.  Again all the group enjoyed the work.  A also revealed that he now has a title for his WIP zombie novel, Yorkshire born; Yorkshire Dead, which is now at three chapters.

There followed a discussion on self-publishing versus agents/publishers and the merits and drawbacks of each.

There was time for a timed writing exercise and the prompts were time travel, worst superpower ever, paranormal, rebellion and the quote 'Telling me what is it you expect to do with your one wild and precious life.'

A, M and I shared our pieces with the group before the meeting came to a close.

The next meeting will take place on 13 April unless the members want to take a break for Easter and both the feedback sessions are available.

Posted by Karen Naylor at 08:18 No comments:

There are still a few days to enter the Winning Writers Wergle Flomp Humor Poetry contest, full details below:

Here is the latest News from New Writing North newsletter, including information on opportunities, competitions and jobs:

Spenborough Guardian and The Press articles on Cleckheaton Literature Festival

Fantastic articles in the Spenborough Guardian: 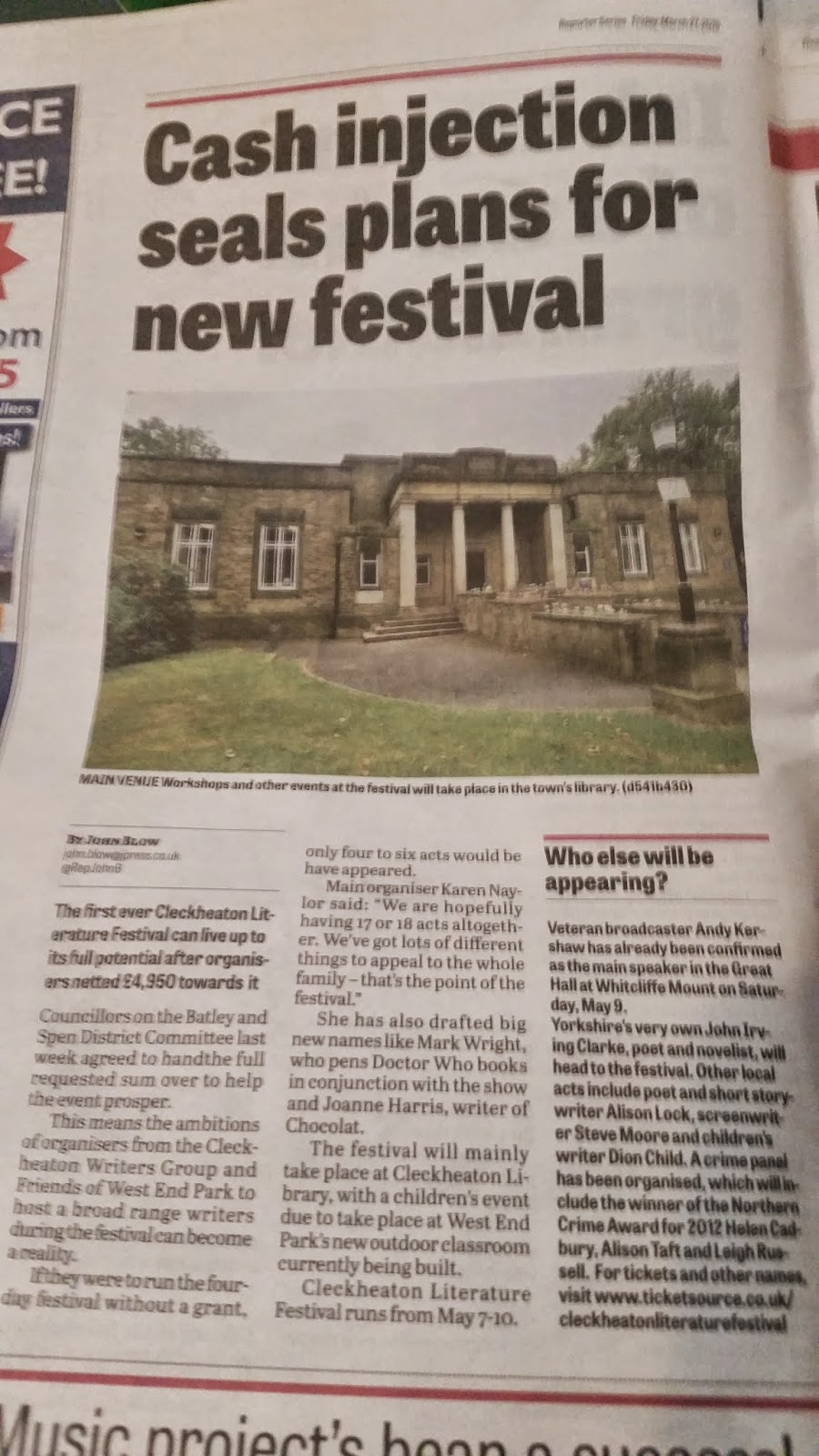 and The Press today: 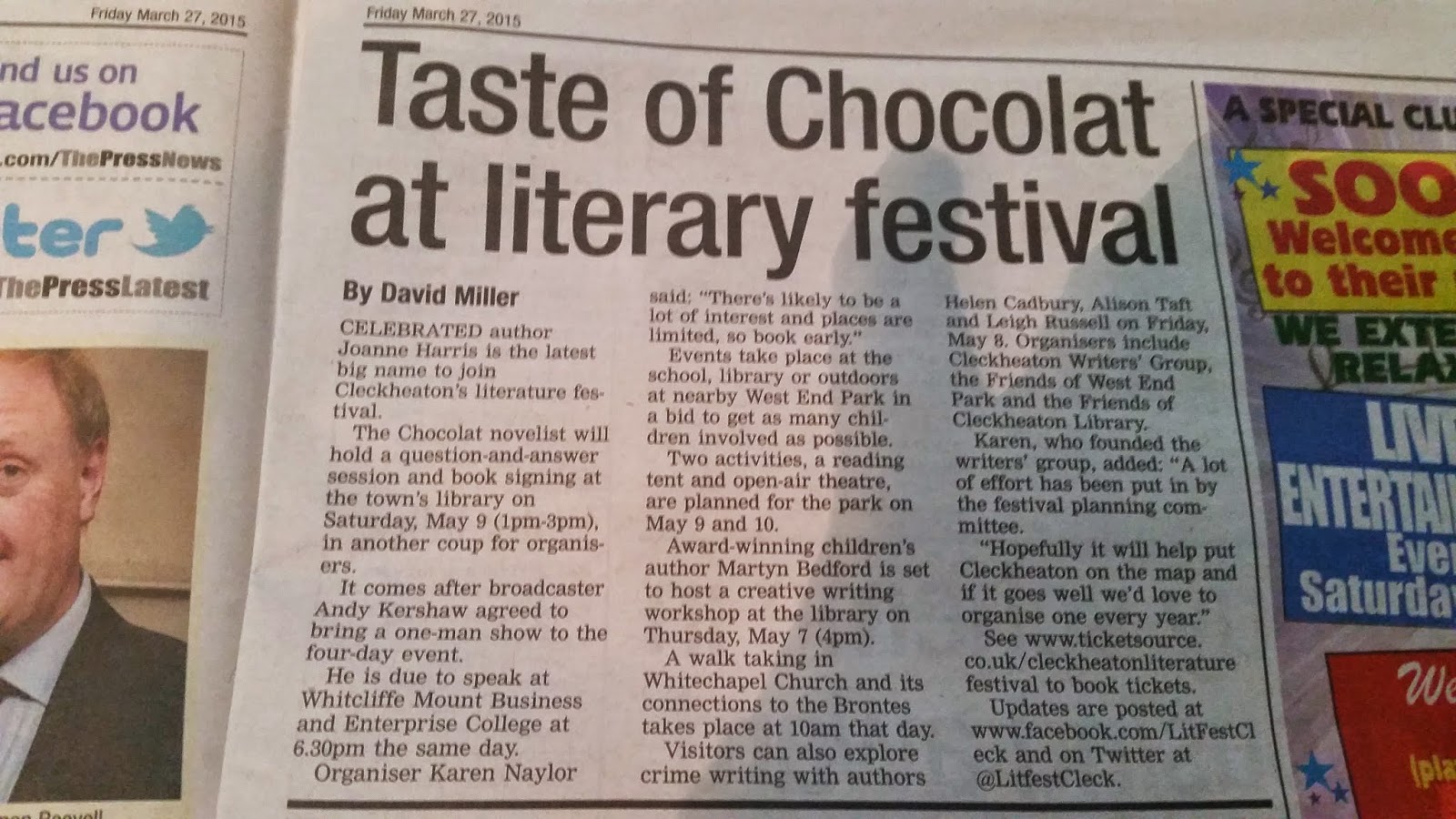 Posted by Karen Naylor at 13:36 No comments:

Cleckheaton Literature Festival have just announced their next event, a Bronte Nordic Walk:

With an experienced local Sherpa guide it's only a short downhill walk to Whitechapel Church where you will meet the lady who discovered the Bronte family tomb in the graveyard. Patrick Bronte preached here at the time of the Luddites when he was Vicar of Hartshead. Explore the historic old church, look at the Norman font and then return to the library for a well-earned rest. Nordic... Pole hire is included in the price.

Posted by Karen Naylor at 12:53 No comments:

Details of the Norfolk & Norwich Festival have been announced: