Happy Halloween to all my followers.

Think you can write a scary story, then this competition could be for you:

Posted by Karen Naylor at 10:32 No comments:

Also, thanks to my fellow CWG member Neil for the following information:

There is and open door submission session at Angry Robot publishing until the end of the year.  If you are unpublished and have a finished novel of the science fiction, fantasy and horror genre then get it sent in:

Posted by Karen Naylor at 02:56 No comments:

Another good meeting of the CWG last night where P, D, N and I were in attendance, C, L & J having given their apologies.

P showed the group that this issue of Writers Forum (#145) has a pull-out poster to help with sticking to the daily word counts of NaNoWriMo - I will be purchasing my copy today.

D informed us about a Workshop being run in February by Alison Taft with the theme of 'Love.'  D and I had wanted to attend Alison's Workshop scheduled for April, but it had been oversubscribed so I was pleased to hear that another one had been put in place (and earlier too).  Households of incomes under £15k can apply for a discount and it is being held near Barnsley.  It will be a small group, so you should get close feedback and there is also the chance to get your work published in an anthology.

D wondered whether it was the right time of year for the Leeds Writing Festival workshop day that she, P and myself attended and when we looked it up, we were surprised to learn that it will be in March 2014.

We then discussed what we each had been working on:

P has various ideas for novels, two of which she read out.  One was a very creepy tale about a body in the ground, the hand grasping outwards (gulp, I thought Halloween was a few days away yet) and the other is written as a perfect synopsis.  D and I were very impressed as a synopsis is a hard thing to get right and we suggested she used this as a starting point for her next writing project or the NaNoWriMo challenge if she wishes to do that this year.

D informed the group that she has yet to hear back from the second agent who asked to see her full manuscript (sadly the first agent passed) and that it has been five weeks now (fingers crossed).  She has started working on her sequel to her children's novel TSC with a working title of TBS and this is what she intends to work on for the NaNoWriMo challenge.

N has been working on his fan fiction writing challenge and TWE, the novel he intends to enter into the Richard and Judy Search for a Bestseller competition and also the manuscript he will be working on for his NaNoWriMo challenge.

I revealed that I had now finished my final edit of Thorde and that I had also sent in my entry to the Richard and Judy search for Bestseller 2014 competition, with my crime novel TPB.  Like L, D and N, I will also be joining the NaNoWriMo challenge this year, with a mainstream comedy entitled SC, and I shared the prologue and opening chapters that I have started early and it was well received (the laughs came in all the right places, phew).

N had to leave the meeting early due to Arriva changing the bus timetable and it has been agreed that a rota system will be put in place for lifts home for N, so that he can attend the meetings without worrying about the time.

The next meeting will take place on Monday 11 November 6-8pm at Cleckheaton Library.  New members always welcome.
Posted by Karen Naylor at 05:40 1 comment:

Having had a productive weekend finalising my fourth draft of my children's fantasy novel Thorde, I am beginning work on honing my synopsis and covering letter in readiness for sending out to agents.

I have just entered the first 10,000 words of my crime novel The Pall Bearer, a synopsis and a short author biography into the Richard and Judy Search for a Bestseller competition.

This leaves my planning for this round of NaNoWriMo.  For those of you that don't know, NaNoWriMo is a challenge set every November to write a 50k novel.  This equates to an average of 1,666 words per day during the month and requires the self-discipline of keeping writing when your self-editor wants to constantly go back and alter what you have written.

I have taken part in NaNoWriMo before, the first year my computer died at just over 20k words (nightmare) and last year I managed just over 35k.  I may not have won the challenge but I have two chunky manuscripts to work on off the back of it.

As I took the 'pantser' approach the two years previously, I am trying to be more productive this year by taking the time to plan ahead. This year I am going to write an inspired-by-true-events novel that has definite comedy elements, currently entitled Space Cake.  So far in my planning I have worked out my plot points in 1-3 sentences (including the inciting incident, turning points and darkest moment), a background for my characters (including character arc for the three main protagonists) and plot-planned out the story events in chronological order.

If you wish to 'friend' me on NaNoWriMo by becoming writing buddies or check out my short synopsis and excerpt from Space Cake, I am YorkshireBelle.

#NaNoWriMo
Posted by Karen Naylor at 06:11 No comments:

Thanks to my fellow blogger Displacement Activity for the following information:

Writing magazine Mslexia is on the lookout for submissions from women writers on the theme of "Troubled Minds": think phobias, depressions, delusions and compulsions  according to the website. Stories up to 2,200 words and poems of up to 40 words may be submitted. The deadline is 2nd December 2013. Published contributors will be paid in line with Mslexia's rates. Full submission details and further information about contributor rates are on the website. The details are here.

Universally Challenged and Are We Live? book review: 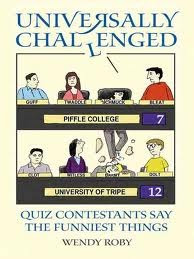 Universally Challenged: Quiz Contestants say the funniest things by Wendy Roby and Are we live? The funniest bloopers from tv and radio by Marion Appleby book reviews

I bought these two as a set from The Book People and they were the perfect antidote to the inclement weather on our recent trip to St Bees.  When the rain was beating down upon our caravan and the kids were getting fed up, reading out the less outrageous of these anecdotes worked a treat.  Some of them were ones I had heard before, but as they say ‘oldies can often be goodies’ and some of the mistakes had me laughing out loud with tears running down my cheeks.

Who would have thought American presidents, Jeremy Paxman and obtuse contestants would come in so handy? 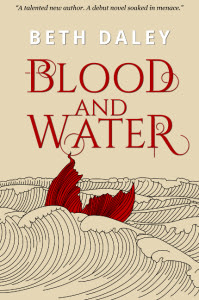 My fellow writer Beth Daley, is launching her debut novel Blood and Water (released by Hic Dragones on 7th November 2013).

There will be launch events in Manchester (7 Nov at the Portico Library, 7-9pm) and Leeds (8 Nov, Maven Bar, The Calls, 6-8pm)  Click here if you want to register:
I’m coming to Manchester or I’m coming to Leeds

Here’s a bit about the book:

Dora lives by the sea. Dora has always lived by the sea. But she won’t go into the water.
The last time Dora swam in the sea was the day of her mother’s funeral, the day she saw the mermaid. Now she’s an adult, a respectable married woman, and her little sister Lucie has come home from university with a horrible secret. Dora’s safe and dry life begins to fray, as she is torn between protecting her baby sister and facing up to a truth she has always known but never admitted. And the sea keeps calling her, reminding her of what she saw beneath the waves all those years ago… of what will be waiting for her if she dives in again.

And some praise by a fellow author:

A talented new author with a feel for details and how to make them count. Daley’s writing is a cumulation of neat touches that grab hold of you, persuade you to care, and drag you deep into a debut novel soaked in menace.
- Toby Stone
Posted by Karen Naylor at 06:55 No comments:

Thanks to my connection Ashley Jones for forwarding me the following information about the new film Project Wild Thing: