Here is the latest News from New Writing North newsletter, including workshops, jobs, opportunities and a last call for entries to the Verb New Voices, for my followers:

Here is the latest New Writing North Read Regional newsletter for my followers: 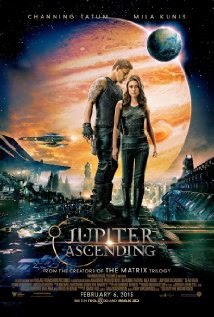 Went to see this film with my two children in the holidays as part of the Odeon £5 per person deal.

IMDB says: In a bright and colourful future, a young destitute caretaker gets targeted by the ruthless son of a powerful family, who lives on a planet in need of a new heir, so she travels with a genetically engineered warrior to the planet in order to stop his tyrant reign.

In this Andy and Lana Wachowski (The Matrix, Cloud Atlas) written and directed film, Mila Kunis (Oz The Great and Powerful, Black Swan) stars as Jupiter Jones whose job as a cleaner and never-ending run of bad luck means that she hates her life.  To try and raise enough money to bid on a telescope, she decides to take up her cousin's offer of selling her eggs to a clinic, but as she is being anaesthetised things suddenly take a turn for the worse.  Saved by a genetically-engineered ex-military hunter, Caine Wise (Channing Tatum, 21 Jump Street, The Vow), she begins to realise that a worse fate than constantly cleaning other people's toilets awaits her: she is a genetic match for an inheritance that a leading warring 'alien' family would do anything to protect.

Sean Bean (Game of Thrones, Goldeneye) is wonderful as Stinger Apini, also ex-military and has a history with Caine, as are Kunis and Tatum, but for me 'man of the moment' Eddie Redmayne (The Theory of Everything, Les Miserables) as Balem Abrasax, stole the film with his chilling portrayal of a man on the edge.  In trying to keep his most valued possession from his sister Kalique (Tuppence Middleton, The Imitation Game, Trance) and brother Titus (Douglas Booth, Noah, The Riot Club), he feels he must eliminate this threat.

The world-building visuals are what make this film though, creating a believable future in both planet relocation and genetics, and this is what I enjoyed most about the film.  It is quite long, but yet it still leaves a lot of questions unanswered.  This could be to tantalise with a sequel, or because the characters lack true depth, but as sci-fi's go, it is a fun ride, though the elephant pilot was taking it a step too far.

Trivia: Natalie Portman and Rooney Mara were considered for the role of Jupiter Jones, the script was over 600 pages long and this film marks the first foray into 3D for the Wachowski's.

#JupiterAscending  #MilaKunis  #ChanningTatum
Posted by Karen Naylor at 04:16 No comments: