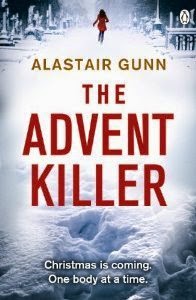 Christmas is coming. One body at a time.

Three weeks before Christmas: Sunday, one a.m. A woman is drowned in her bathtub.

One week later: Sunday, one a.m. A woman is beaten savagely to death, every bone in her body broken.

Another week brings another victim.

As panic spreads across London, DCI Antonia Hawkins, leading her first murder investigation, must stop a cold, careful killer whose twisted motives can only be guessed at, before the next body is found. On Sunday.

New DCI Antonia Hawkins has been assigned the deadly chalice of Operation Charter, a serial killer who seems to be using advent as a timetable for his murders.  Her team are DS Eddie Connor, trainee DC John Barclay, DI Frank Todd and DS Amala Yasir, but then her boss Lawrence Kirby-Jones assigns her one more member, Mike Maguire, her American old-flame.

The Home Office pathologist Gerald Pritchard and the Met's top criminologist agree that the violence to his crimes is escalating and that Glenice Ward and Tess Underwood are not going to be the only victims.  She needs to find a link, but the only obvious one is the use of a Taser.

Gunn has a good main character, she has human frailties rather than a hard exterior and an over-reliance on alcohol, but she can be quite one-dimensional compared to the killer.  I did guess early on who this was, although that did not stop me reading, as my huge enjoyment of crime novels (and the fact that I am a writer) does mean that I spot things that other readers may not.  The sections from the perspective of the killer worked far better and keeps the reader trying to work out the psychology of his thinking and the use of more than one ex for the DCI was a good mechanism for diversionary tactics, but for me, the killer was the reason I kept reading.