The latest information about the Harrogate Writers Festival has just been sent to me, including pictures and a review of the Poirot and Me: An evening with David Suchet, that I attended at Christmas:

My fellow Cleckheaton Writers Group member N has just let me know about the following new prize for 2014 as part of The Bridport Prize:

Thanks to my fellow blogger Displacement Activity for the following competition information:


"We’re pleased to invite entries for the Wyn Harness Prize for Young Journalists. The competition is open to anyone aged 25 or under who is embarking on a career in journalism, either in training or their first employment.


The challenge is to write a news report of between 500 and 700 words about  an aspect of British society that rarely  makes the headlines. Our winner will  receive £1,000, have their work published in i and The Independent, and be  offered a two-week placement in our London newsroom. Entries should be  emailed to features@independent.co.uk by 31 January 2014. The judges will look for style, accuracy and an eye-opening and unusual subject."

New short stories of up to 8,000 words from writers who have been previously published may now be entered into this BBC / Booktrust competition. The competition closing date is 28th February 2014. There's a £15,000 first prize plus a range of runners-up awards on offer. Full details are available on the competition website.

Dundee International Book Prize 2014
The 2014 Dundee International Book Prize is now open for entries. Complete unpublished novels (in any genre) may be entered. The competition closing date is 3rd March 2014. There's a first prize of £10,000 and publication by Cargo Publishing. More details may be found here.
Flashbang crime flash fiction competition
This flash fiction competition is for a crime story in 150 words or under. The closing date is 3rd March 2014. The first prize is a full weekend pass to 2015's CrimeFest (to be held in Bristol in May 2015). Runners-up awards are also on offer. More details may be found here.
AsparaWriting Festival short story competition 2014
Short stories of up to 6,000 words (crime-themed, and including asparagus in some way) may be entered into this new writing competition. The closing date is 29th March 2014. There's a £100 first prize, plus runners-up awards. There's also a junior variant of the competition with a 3,000 word limit. More details may be found here.


Short Fiction Journal 2014 International Short Fiction Prize
This short story competition is for previously unpublished fiction (in any genre) of up to 5,000 words. The competition closes 31st March 2014. There's a first prize of publication plus £500, with runners-up awards also available. More details may be found here.
West Sussex Writers short story competition
This, the second annual competition run by West Sussex Writers, is for short stories on any theme. There's a 3,000 word limit. Stories should be submitted by 31st March 2014. There's a £100 first prize, plus there are runners-up awards also. Full details are at the competition website with rules being listed here.

Almond Press "Broken Worlds" Dystopian Fiction short story competition 2014
Original and previously-unpublished short stories of up to 5,000 words may be entered into this competition for dystopian fiction. The closing date is 1st May 2014. There's a £100 first prize and short-listed / winning stories will be anthologised. More details and competition rules may be found at the Almond Press site


Manchester Metropolitan University has announced a new creative writing prize for novella-length fiction. Novellas (between 20,000 and 40,000 words) should be submitted by the competition closing date of 23rd May 2014. There's a first prize including publication by Sandstone Press and £1,000. The winner will be selected by novelist Jenn Ashworth. Full details on the prize may be found here.

Eamonn's blog can be found at http://www.displacementactivity.co.uk/
Posted by Karen Naylor at 04:00 No comments:

My friend Aj and I went to see this movie at the Odeon today as it had been recommended by my Mum-in-law as a feel-good film.

IMDB says it is: The true story of Paul Potts, a shy, bullied shop assistant by day and an amateur opera singer by night who became a phenomenon after being chosen for -- and ultimately winning -- "Britain's Got Talent".

The film starts by cataloguing the history of bullying in his childhood, showing us why Potts has a lack of confidence and has us rooting for him trying to follow his dream of becoming an opera singer like his hero Pavarotti.  When Braddon intervenes, Paul finally meets his 'girlfriend' who he has been texting (and who he has told that he looks like Brad Pitt) but worrying that even though she says she looks like Cameron Diaz, she may be a bloke.  Alexandra Roach (Anna Karenina, The Iron Lady) plays Julz, the girlfriend who 'is a woman' and she suggests he enter the talent contest in order to get enough money together to go to Venice to pursue his dream.

Potts is loving Venice, but struggling to make friends and fit in.  Then he is given a chance to sing for his idol Pavarotti and his nerves let him down.  Giving up on his dream, he returns to Wales to live an ordinary life.  He has to work hard to win back Julz and Braddon helps him get the Manager's job at Carphone Warehouse, but when the chance to sing again comes along in the form of the "Britain's Got Talent" TV show, Julz is the catalyst to ensure that he is given his one chance.

For those of you, like me, that like to play the spot the actor/actress game, don't miss the small appearance by 2 Pints of Lager and a Packet of Crisps actress Kathryn Drysdale (St. Trinian's, Vanity Fair) and Reggie Yates (Dr Who, Demons Never Die) as Production Assistants on the "Britain's Got Talent" scene.

My Mum-in-law was right, this is a heartwarming film, but it has quite a few flaws.  For example, for me, the dubbing when Corden sings is too obvious and detracts as well as distracts, the comedy moments were too few and if Corden was attempting a Welsh accent, I couldn't detect it.  That being said, I did enjoy the movie, I just didn't laugh as much as I thought I would. 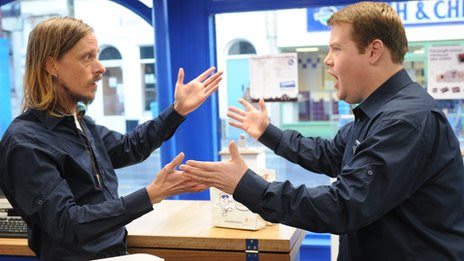 Thanks to my fellow blogger Blog About Writing for the following information on a new Writing Festival for aspiring writers:

Stella Duffy
No matter what your writing level, our aim is to encourage new writers. At the AsparaWriting festival you will have the opportunity to get to know our guest authors personally, working closely with them in a full day’s workshop. Come to talks by the authors in the evenings, or enjoy special, private dinners with them.

Quintin Jardine
There are nine two-day events during the Festival, each hosted by a different writer. Here you can learn from the professionals about writing crime, history, comic or straight fiction, even poetry. All the writers involved are professionals, with over 300 novels published between them.

Michael Jecks
For more information about each author and their events, please look to the “Events” tab above. There are links to the locations for workshops and talks under “Venues”, and if you’re coming, why not book a room at the fabulous Evesham hotel too? And if you’re an aspiring writer, don’t forget to check our new Short Story Competition!

Rebecca Tope
AsparaWriting: come and learn from the professionals!
Check out full details at http://asparawritingfestival.co.uk/
Posted by Karen Naylor at 11:40 No comments: