Freedom Studios North Country at The Wild Woods is on now in their new theatre space in Bradford:

Posted by Karen Naylor at 02:57 No comments: 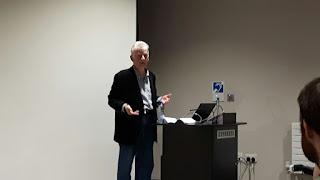 I attended this workshop with one of my fellow CWG members Neil on Thursday.  The workshop was a collaboration between Kirklees Libraries and Museums and the University of Huddersfield.

Ken McLeod is a sci-fi novelist from Scotland whose novels look at how we negotiate living together with difference and Ken started his talk by asking the audience if they really wanted to be a sci-fi novelist because you have to love sci-fi and read quite a lot of it.  He suggests accessing current sci-fi via a library/bookshop/charity shop to see what is hot at the minute or Penguin Science Fiction Omnibus, as it is a great introduction to the golden age of sci-fi.

He feels the beginning of your novel is important as you only have a couple of pages to grab the readers' attention, so if you can grab it in the first sentence, even better.  Some novels are more about the world/idea/possibility than the character.  But the character viewpoint should be like a video game in a first person shooter, e.g. War of the Worlds narrator.  There is still a statue of the Martian in Woking even today.  Sometimes characters are important, as the story turns on their actions and it is essential to surprise the reader.  Observe people to get this, but he puts character ticks of real people and mixes and matches for a character, e.g. tick, appearance, speech etc.  He gave an example that there is a passage in The Wasp Factory which is appalling and disgusting, but it was told to him and the writer of the book as truth by a nurse they knew in real life, so plunder your own experience when writing.

His second novel (18 months to do as a 2 book contract) was a 2040s character of a man in his 80s, but as he was born in the 1950s, grew up in the 70s/80s, he could plunder his own diaries as he and the character would be the same age.  He suggested keeping a diary to help with this.  As you get older, he feels you get less and less ideas, but more time to write, so keep the odd line etc. and use it later.

He used to be an IT programmer and his fellow ex-IT writing friend liken writing to programming in that you look at page and page of blank screens, get the specifics and then follow it.  His writer friend feels it is easy to write like that, he often interrupts one story to write another as he gets the idea and then goes back to finish the other.

There is a useful ebook he recommends by M Harold Page, Storyteller Tools available for around £2 on Amazon.  M Harold Page writes swords and sorcery fantasy and the book tells you how to write a story from an idea.

He suggests you start small with your plot, and then complicate it, build up with twists and turns, battles and the big reveal at the end - not forgetting the aftermath and the rumble of another conflict coming in the future, e.g. Empire of the Sun.  Sci-fi and fantasy is specific, so research world building, communicating information and the story.

Research - the R word - as it matters that you get the science right.  All stories are a response to another story, e.g. time travel (HG Wells) led to time machines, then trying to change the past, then time paradoxes.  Read sci-fi and get used to the protocols of SF, get used to picking up clues as to what's important and what's not.  Between speculation and hard fact (e.g. HG Wells thought Mars had canals but we now know different, so it would have to be an ironic story now).  Look up basic/kids stuff to check anything you are not sure about and then work your way up.  Read key prints - Neal Stephenson, Greg Egan and Stephen Baxter, current magazines like New Scientist, Scientific American or Nature, £5 a week to keep up with current affairs and good background reading, old blue penguin books are a good introduction, as are Oxford very short productions for information on planets which you can also get from the library or on-line.  SF writer William Gibson said he used his wife's fashion magazines as there was lots of good stuff there (that were in vogue but not worn) - clever observational.  Read more than you need on science - history is the trade secret of science fiction (could have been Isaac Asimov that said this).

In terms of fantasy, you have to like reading it too but go to the source, like European history, religion, folklore, magic, alchemy, witchcraft etc. e.g. penguin atlas of world history and draw a map (Tolkien started this) as mentioned on the BBC4 programme the previous evening.  The Tough Guide to Fantasyland by Diana Wynne Jones tells you which clichés you want to avoid, such as in an Inn there is stew and ale, fat muscly barman or buxom barmaid.  Real history used well is also a good device, e.g. George R R Martin and for landscapes, organisms etc. National Geographic is good.

When you share details and aspects of your world it was common to stop the story dead while you or your character explained it, now 'incluing' is used.  The is a term invented by Jo Walton (see Tor.com) and her book 'What makes this book so great' is an essay on cluing in the reader unobtrusively about the characters' real world that the character would know about but the reader couldn't.  Need to avoid things like 'straining your eyes through the blue screen views' as metaphors get literalised e.g. eyes getting misplaced, use gaze or look.

There are 2 sci-fi magazines in UK, Enterzone (he sent 3 short stories in the 80s) and Shoreline of Infinity in Scotland.  Online there is clarkesworld, SF Horizons etc.

When you submit, get it right the first time.  Writers and Artists Yearbook, then website and look for SF editor name, submit to them or an SF agent.  He recommends not self-publishing unless that is all you're hooping for, as he thinks it is high risk and can ruin a published career.  Include a brief covering letter.

On a hopeful note, of the 10k writers that have an idea, 100 start it,  10th finish and 90% of these can't write for toffee, so we are already in the top 10%, so that just leaves how interesting and well told your story is.  So keep trying.

Ken then opened it up to questions which resulted in the following information:

Make it clear in your writing that it is a possible future, not a probable future.  You can also make it an alternative future or past, and you may well live into the future you are writing about, so don't put in any dates, e.g. The Night Sessions.  Kim Stanley Robinson's Mars novels has a red, green and blue Mars that have a revolutionary movement as a hero, first 100 settlers revolt - political sci-fi.

Don't worry if it is a well-worn idea, e.g. alien invasion, as so long as there is a new take on it, it will be original as only you could write it.

To wrap up the session, Ken then read from the first page of The Cassini Division.

Upcoming events at English PEN include Satire on the Front Line and a vigil for Saudi Arabia's imprisoned writers, details below:

Posted by Karen Naylor at 06:52 No comments:

Having submitted to the Penguin Random House UK mentoring programme today with my current WIP, I thought I would share details of the New Writing North Northern Writers' Awards FREE Writers Roadshows which are coming up.  I have already booked for the Leeds one, so I thought I would share the information with my followers so that you can book too:

Posted by Karen Naylor at 16:08 No comments: