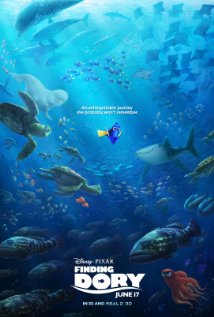 IMB says: The friendly but forgetful blue tang fish begins a search for her long-lost parents, and everyone learns a few things about the real meaning of family along the way.

Before the main feature there is an adorable short called Piper in which a young bird is encouraged to find food itself for the first time, only to be scared by the sea.  The animation is more hyper-real than that used in Finding Dory and this helps to draw you in to the action despite the lack of talking.  For a six-minute film, it is really powerful an enjoyable.

Thirteen years in arriving, the sequel to Finding Nemo, Finding Dory joins the fish over a year after the original movie with Dory having the lead in travelling the ocean to find her parents.  The film was inspired by a line she says in the original, 'I have short term memory loss, it runs in my family, at least I think it does,' and she begins to remember when helping teach a class with Mr Ray (voiced by Bob Peterson).

Journeying through the ocean the trio meet up with a few old favourites including Crush and Squirt but they get separated and Dory is 'rescued' by workers at The Heart of Morro Bay Marine Life Centre, so Marlin and Nemo have to find a way to get in with the help of Fluke (Idris Elba: Thor, Pacific Rim) and Rudder (Dominic West: 300, Chicago).  Dory meanwhile is being helped by a grumpy octopus, Hank, who is going to find her parents in exchange for getting a tag which will access his ticket out of the Centre.

Her memories flow thick and fast the further in to the Centre she gets and certain words trigger the answers she is so desperate for. Aided by a whale shark and a beluga, she finds out where she can find her parents, Jenny (Diane Keaton: Father of the Bride, The Godfather) and Charlie (Eugene Levy: American Pie, Cheaper by the Dozen 2).

Although many filmgoers would say that a sequel was not needed after such a classic, but Toy Story paved the way to show us that it can be done, it is a good movie. The ending is outrageous, but you have already suspended belief well before then so it doesn't seem to matter.

Wait for the end credit scene though to find out what happened to the 'tank gang' from Finding Nemo.

Trivia: Hayden Rolence replaces Alexander Gould as the voice of Nemo, due to having outgrown his original role since Finding Nemo (2003), though Gould does have a Cameo as Passenger Carl. Finding Dory (2016) was first announced by Ellen DeGeneres, who voices Dory, on her talk show following a long campaign for a sequel. Hank has only seven tentacles because the animators realised they could not fit eight onto his body, so his backstory was rewritten to account for the missing limb.

#FindingDory  #EllenDeGeneres
Posted by Karen Naylor at 11:58 No comments:

Coming soon to Theatre in the Mill, Bradford

There are several live performances coming up at Theatre in the Mill in September, details below:

Posted by Karen Naylor at 15:24 No comments:

For those of my followers who have had their children's or YA book published, SCBWI Book Blast is coming, and you can start customising your own page from 1 September, details below: