There is a creative writing workshop with the fabulous Helen Cadbury, from Cleckheaton Literature Festival 2015's Crime Panel, in York for young people (8+) on the 8th or 13th August, based on the fruits of her research: Telling York Stories. 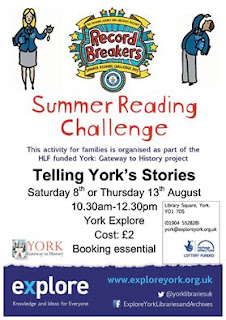 * I AM TAKING A BLOG BREAK FOR A FORTNIGHT, SEE YOU ALL AGAIN THEN*
Posted by Karen Naylor at 03:34 No comments:

There are some more events coming up in Autumn, details below: 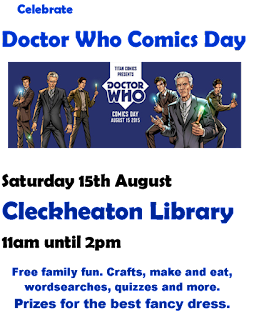 Celebrate international Doctor Who Comics Day at Cleckheaton Library on Saturday 15th August. Free family fun from 11am until 2pm. Crafts, colouring and quizzes. Make and eat your own adipose. Dare you have your photo taken with the auton ? Prizes for the best fancy dress and more. PLUS, special guest Mark Wright - back by popular demand after his appearance the Cleckheaton Literature Festival. Places for Mark’s talk are free but booking is essential as places are limited. Please call 01274 335170 to book. 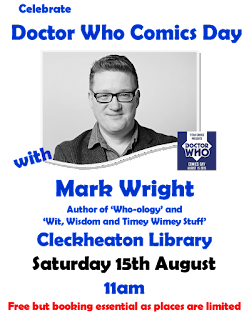 Posted by Karen Naylor at 11:57 No comments:

The Cleckheaton Writers Group took place tonight with A, P and myself in attendance, N and M having passed on their apologies.

The minutes of the last meeting were agreed and for Work In Progress updates, I informed the group that I had been editing some of my work, submitting to competitions and pitching to the Dragon's Pen at The Theakstons Old Peculier Crime Writing Festival (TOPCRIME).  A has been writing, including a new screenplay idea which he outlined in detail to the group.  P has been working on editing S's novel.

We then discussed tenses in novels and how much difference it can make to a novel when switching.

I then outlined the workshops I attended at TOPCRIME, including for TV and Radio (review blog posts will be upcoming) which led on to a discussion about drama versus reality TV.

The next meeting will take place in a fortnight, same time and place.
Posted by Karen Naylor at 14:16 No comments: