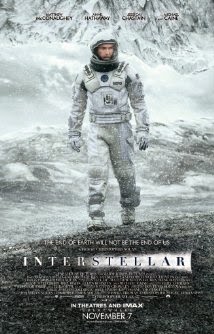 Went to see this movie yesterday at the Leeds/Bradford Odeon with my Mum and my friend Aj.

IMDB says: A team of explorers travel through a wormhole in an attempt to ensure humanity's survival.

In this Christopher Nolan (Inception, Batman Begins) directed and written (with his brother Jonathon Nolan - The Prestige, Memento) sci-fi/adventure film, Oscar-winner Matthew McConaughey (Dallas Buyers Club, The Wolf of Wall Street) as Cooper, an ex-astronaut who now farms to try and combat the earth's famine and drought which threatens humanity.  Disappointed that his 15 year old son Tom (Timothee Chalamet - One and Two, Men, Women and Children) has not been chosen for University, but for farming, he begins to reminisce on his past career.  His 10 year old daughter Murphy (Mackenzie Foy - The Twilight Saga: Breaking Dawn - Part 2, The Conjuring) discovers a 'ghost' in her room that leads them to a secret compound where he finds that there is a plan to save humanity by travelling beyond our own solar system to discover a planet capable of sustaining life.

Professor Brand (Michael Caine, The Italian Job, Kingsman: The Secret Service) has discovered a mysterious rip in the space-time continuum and an intrepid crew, including his daughter Amelia, are to voyage through a black hole to find a habitable planet.

Leaving his children in the care of their grandfather Donald (John Lithgow - Shrek, 3rd Rock from the Sun), Cooper joins Brand (Anne Hathaway, Les Miserables, The Devil Wears Prada), Doyle (Wes Bentley - The Hunger Games, American Beauty) and Romilly (David Gyasi - The Dark Night Rises, Cloud Atlas) to look for one of the surviving astronauts sent to discover a life-sustaining planet, two of which are Edmunds (who Brand is in love with) and Mann (Matt Damon - The Bourne Identity, We Bought a Zoo), the brightest scientist of his generation.  To do so, the astronauts have to travel through accelerated time, so Cooper then has to choose between saving the planet or seeing his children again.

This sci-fi plays between time periods exceptionally well, bringing home the enormity of Coopers task and the cost, as his children grow up whilst he struggles with his mission.  His father-in-law dies, his son (played by Casey Affleck - Gone Baby Gone, Good Will Hunting - Ben Affleck's younger brother) marries and becomes a father himself, but all the while his daughter refuses to send him messages, having not forgiven him for leaving them.  Jessica Chastain (Help, Zero Dark Thirty) as the grown-up Murphy, struggles to complete the equation that could help her father return.

Quite a few critics have slammed this epic film for being unbelievable, but as we do not know what it would be like to go through a wormhole, or if 4th or 5th dimensions are possible, I think the Nolan brothers dealt well with such a high-concept script.  The visuals were stunning, as was the Hans Zimmer (The Lion King, Inception) score and the film left the ending clear for another instalment, both my mother and my friend enjoyed the film as much as I and are looking forward to the sequel.

Trivia*:  Anne Hathaway suffered hyperthermia whilst filming the scenes in Iceland due to her astronaut suit being open during the icy water scenes.  Steven Spielberg was originally attached in 2006 to direct the film and hired Jonathon Nolan to write the screenplay, Nolan hired his brother when Spielberg departed to work on other projects.  Coopers real name is never revealed throughout the entire film.  This is the sixth collaboration between Nolan and Caine, Batman Begins (2005), The Prestige (2006), The Dark Knight (2008), Inception (2010) and The Dark Knight Rises (2012).  At 169 minutes in length, and $165 million in cost, it took $976,000 per minute to make.

*All trivia researched and sourced from IMDB
Posted by Karen Naylor at 08:42