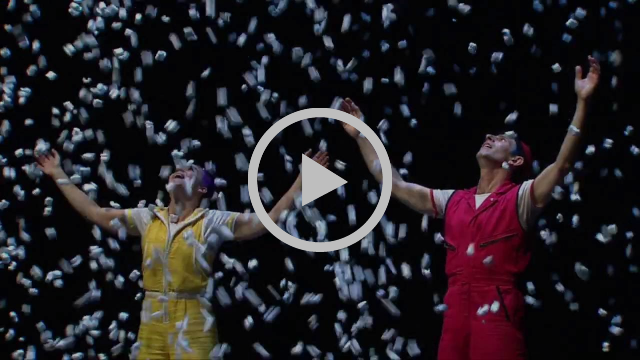 My good friend Lisa and I went to see this last night and what a joy it was.  Caught in a make-believe world somewhere between childhood and now, we were entranced as air, balloons, feathers, material, glitter and polystyrene shapes were used to transport you to a magical place where you not only felt free and happy, but part of the performance itself.  Indeed at one point performers Seth Bloom and Christina Gelsone invited two audience members onto the stage to do just that.  Playful and fun, in parts hilarious then thoughtful, it made me feel like a child again and it was truly an evening that can be enjoyed by everyone no matter what their age.

I highly recommend that you try to catch this while it is still on at Lawrence Batley Theatre, Huddersfield.

The LBT is proud to present the international circus spectacle, Air Play


Ride the wind and dream with AIR PLAY, a modern spectacle that brings to life the very air we breathe. Flying umbrellas, larger-than-life balloons, giant kites floating over the audience, and the biggest snow globe you’ve ever seen will make you gasp in wonder and laugh until it hurts.


AIR PLAY is a circus-style adventure of two siblings journeying through a surreal land of air, transforming the ordinary into objects of uncommon beauty. With visual images seemingly sewn from the sky, this poetic ode to childhood will enchant and electrify the young and young at heart.


To get a real taste of this wonderful performance we recommend watching the trailer - https://youtu.be/dDgrF_Zf9kk