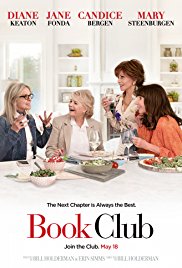 Having had this film recommended to me, I went to see it today at the Leeds/Bradford Odeon.

IMDB says: Four lifelong friends have their lives forever changed after reading 50 Shades of Grey in their monthly book club.

In this Bill Holderman (The Old Man and the Gun, A Walk in the Woods) directed and written, with Erin Simms (Our Souls at Night, A Walk in the Woods), film the four friends, Diane (Diane Keaton: Something's Gotta Give, Father of the Bride), Vivian (Jane Fonda: Barbarella, Monster-in-Law), Federal Court Judge Sharon (Candice Bergen: Sweet Home Alabama, Miss Congeniality) and Carol (Mary Steenburgen: Back to the Future Part III, The Proposal) decide to read 50 Shades as their monthly book. Diane is a widow of over a year, whose overprotective daughters Adrianne (Kate Aselton: Black Rock, The Gift) and Jill (Alicia Silverstone: Clueless, Batman and Robin) are trying to convince her to move into their basement because she is 'old and might fall.' Vivian is a vivacious hotel owner who lives life on her own terms, including men. Sharon has been divorced over 18 years who has just found out her ex and her son have recently got engaged and Carol, whose husband Bruce (Craig T. Nelson: Coach, The Incredibles) seems to have changed since retirement.

Just as they begin to read the book, things begin to change. Diane meets pilot Mitchell (Andy Garcia: The Godfather Part III, Ocean's Eleven) who pursues her for a date, Vivian bumps into old flame Arthur (Don Johnson: Django Unchained, TVs Miami Vice) rekindling old feelings leading her to question her perfect life, Sharon realises she must move on from her ex Tom (Ed Begley Jr: Pineapple Express, Whatever Works) and start dating again and Carol realises her husband has lost interest in sex since his retirement.

Sharon's foray into online dating has mixed results, though she does get two dates, one with Accountant George (Richard Dreyfuss: Jaws, Close Encounters) and the other with Doctor Derek (Wallace Shawn: The Princess Bride, The Incredibles).

Despite not being the demographic aimed at for this movie, it was a delightful little film that had me laughing and crying in turn. Yes, it is predictable but it is also relatable and the cast were great together. There are a lot of reviews panning this on IDMB but I thought it was charming and a fun way to spend an afternoon.

Trivia: Don Johnson's daughter Dakota Johnson starred as Anastasia Steele in the Fifty Shades of Grey trilogy. E L James (author of 50 Shades) and her husband can be seen in the film in the scene where Carol and Bruce are arguing in their front yard and they are walking their dog past them. Co-stars Diane Keaton, Jane Fonda and Candice Bergen have each dated Warren Beatty, as has Don Johnson's ex-wife Melanie Griffith.