I went to see this movie at Leeds/Bradford Odeon with my friend Aj. 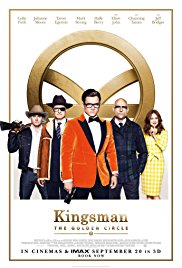 IMDB says: When their headquarters are destroyed and the world is held hostage, the Kingsman's journey leads them to the discovery of an allied spy organization in the US. These two elite secret organizations must band together to defeat a common enemy.

In this Matthew Vaughn (Kick Ass, Snatch) directed film, also written by him, Jane Goldman (Stardust, Kick Ass), Mark Millar (comic book 'The Secret Service) and Dave Gibbons (comic book 'The Secret Service), Taron Egerton (Eddie the Eagle, Sing) once more stars as Eggsy (A.K.A. Galahad) who must work with Merlin (Mark Strong: Stardust, Tinker Tailor Soldier Spy) when the Kingsman HQ is blown up to find out who is responsible.

The movie starts by Eggsy being approached by rogue Kingsman recruit Charlie Hesketh (Edward Holcroft: Vampire Academy, TVs Gunpowder) who tries to kill him using his mechanical arm whilst in a moving car.  Merlin helps him to escape and Eggsy makes his way to his friend Brandon's (Calvin Demba: Rue Boy, London Road) birthday.  Also there are his other friends Liam (Thomas Turgoose: This is England, Eden Lake), Jamal (Tobe Bakare: TVs Death in Paradise and The Tunnel) and Eggsy's girlfriend Princess Tilde (Hanna Alström: A Place in the Sun, Kingsmen: The Secret Service).  He asks them if they can look after his dog JB while he meets her parents.

While Eggsy is meeting Tilde's parents (Björn Granath: The Girl with the Dragon Tattoo, Evil and Lena Endre: The Master, The Girl with the Dragon Tattoo), both his home and the Kingsman HQ are destroyed killing all inside.  Finding that Merlin has survived they travel to Kentucky, America (as per Kingsman protocol) where they meet Agent Tequila (Channing Tatum: Logan Lucky, Step Up), Ginger Ale (Halle Berry: Monster's Ball, Gothika) and Whiskey (Pedro Pascal: The Great Wall, TVs Game of Thrones) at the Kingsman distillery, where they find they have been keeping amnaesiac Harry Hart (Colin Firth: The King's Speech, Love Actually) since his encounter with Valentine.  Head Statesman Champagne/Champ (Jeff Bridges: True Grit, The Big Lebowski) tells them they must find out what Charlie Hesketh knows and to do that, they must travel to Glastonbury music Festival to find out what his ex-girlfriend Clara (Poppy Delvigne: Elvis & Nixon, King Arthur: Legend of the Sword) knows of his whereabouts.

The new enemy is the 'Golden Circle' led by American drugs billionaire Poppy Adams (Julianne Moore: Still Alice, The Kids are All Right) who is keeping Elton John hostage in her rural jungle in Cambodia which she has named Poppy Land.  Will the agents get to her and the antidote for her lethal drug in time?

The film also stars Bruce Greenwood (Star Trek, I, Robot) as the President of the United States and Emily Watson (The Book Thief, Red Dragon) as his Chief of Staff Fox and Mark Arnold (Blade Runner, Florence Foster Jenkins) as General McCoy

Having loved the original, this is a poor sequel.  A lacklustre script with predictability in the characters and storyline (what there was of it), plus a villain who did not seem to have a reason to oppose the hero.  With juvenile humour and sexism on another level to the first film, the Glastonbury 'storyline' stooped to beyond offensive to women (I suspect most audiences forgave the original Tilde one because the rest of the movie was so great) and far too many f-words from Elton John, who though a very talented singer, cannot act, the film is a huge let down.

Firth, Egerton and Strong do their best with the woeful material, as do Bridges, Berry and Pascal (seriously, why would anyone not give Berry something to do unless it's because she plays a female character?) yet none of them were given a chance, no wonder Firth spent the movie looking like he wished he wasn't there.  I suspect the rest of them felt the same.

Trivia: The film's cast includes five Oscar winners: Julianne Moore, Halle Berry, Jeff Bridges, Colin Firth, and Elton John.  Julianne Moore based her characterization of Poppy on Gene Hackman's performance as Lex Luthor in the Superman movies.  The original cut ran 80 minutes longer.  The robot dogs, Bennie and Jet, are a reference to Elton John's song "Bennie and the Jets."  Mark Strong, who plays Merlin, provides the voice-over for Vue Cinemas in the UK and Ireland with regards to cinema etiquette. Exclusively for "Kingsman: The Golden Circle" screenings, he delivers the etiquette message in character as Merlin, reminding audiences to switch off their phones in his own unique style.