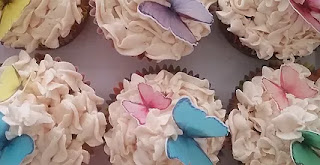 Cleckheaton Writers Group (CWG) held our first Cuppa and Cake Write-In yesterday at the Ribbon Tree Cafe in Cleckheaton. It took place from 1.30pm where eight writers from CWG were in attendance, each with a specific writing goal:

Karen: I wanted to write the last few chapters of my crime novel The Pallbearer to bring it to first draft. I reckoned there were about eight chapters or so left, so I wanted to head towards bringing the novel to a close.

Mandy: Mandy wanted to write a short part of one of her novella chapters 'Paper Fish' that needed a rewrite and write three new poems (first draft) that she already had ideas for.

Kathy: Kathy wanted to figure out where her 'Tobias' novel was going and bring everything out (i.e. the truths that the characters were hiding from each other that the reader knows).

Pauline: Pauline wanted to plan a ghost story using beat sheets and write the first few lines about the characters.

Cassie: Cassie wanted to complete the introduction to her story 'Angels in the Architecture.'

Alice: Alice wanted to increase her word count for her WIP novel 'It's About Time' from 3,382 words as she has a deadline of 10k words by the end of the month.

Neil: Neil wanted to get back into his story 'The Cubby Hole' and write a few thousand words as he hadn't written anything for two years.

We all worked hard, whilst ably assisted by tea, coffee, juice and cake supplied by the cafe owner Sarah, and at the end of the session we felt that we had all achieved our writing goals for the day. For example, I had written 2,919 words which equated to a few chapters of my WIP, Kathy had written one chapter of her WIP, Alice had written over 3k words nearly doubling her word count and Neil was back into the writing groove having written 2 chapters of his ghost story. Pauline even got to act out a murder scene from her ghost story!

All the members present felt that it was a great writing day and that we should do it again in November, possibly twice as it is NaNoWriMo, so we hope to organise another event soon. Should any of my followers wish to take part in write-in's with us or as help with NaNoWriMo, please don't hesitate to comment on my blog and let me know. 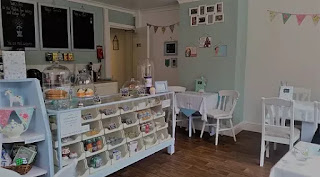