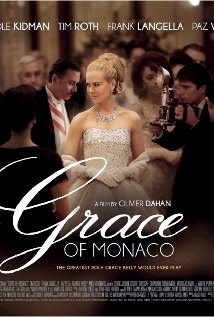 Went to see this film today with my friends B and A not expecting much as the movie had been widely panned by critics.

IMDB says: The story of former Hollywood star Grace Kelly's crisis of marriage and identity, during a political dispute between Monaco's Prince Rainier III and France's Charles De Gaulle, and a looming French invasion of Monaco in the early 1960s.

Nicole Kidman (Railway Man, The Others) stars as Grace and Tim Roth (Lie to Me, Reservoir Dogs) as Prince Rainier in this Olivier Dahan (La Vie en Rose, Ghost River) directed and Arash Amel (The Expatriate) written film.  When Alfred Hitchcock (Roger Ashton-Griffiths: Gangs of New York, Knight's Tale) approaches her to play the lead in Marnie, Grace's spiritual adviser Father Tucker (Frank Langella: Frost/Nixon, Superman Returns) advises her to cement her role as Princess of Monaco, enlisting the help of Count Fernando (Derek Jacobi; Gladiator, The King's Speech) to teach her deportment, French and the history of Monaco, as the principality is under threat from Charles De Gaulle (André Penvern: La Vie en Rose, Dirty Rotten Scoundrels).  It soon becomes apparent that there are traitors in their midst, giving the French President his edge and Grace determines that she will use her fame to help.

The film is a fictional version of true events and was worth seeing for the history of the political events alone, but unfortunately it did come across as this years 'Diana' which is never a good thing.  Kidman, though an accomplished actress, did not convince as this iconic lady (her red hair throughout the film did not exactly help), but it was fascinating to see the machinations of royalty and politicians.

Trivia:  In a scheduling coincidence, production started during the 30th anniversary of the death of Princess Grace