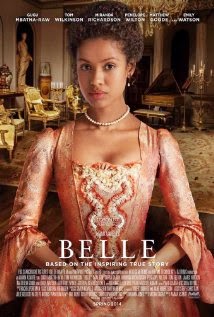 Went to see this movie today at the Leeds/Bradford Odeon with my friend B.

IMDB says: The mixed race daughter of a Royal Navy Admiral is raised by her aristocratic great-uncle in 18th century England.

Her lineage means she has certain privileges, but the colour of her skin prevents her from other forms of social standing afforded to her illegitimate cousin Elizabeth (Sarah Gadon, Cosmopolis, Being Erica) who has her eye on James Ashford (Tom Felton, Harry Potter, Rise of the Planet of the Apes) the eldest son of Lady Ashford (Miranda Richardson, Blackadder, Sleepy Hollow).  When Belle's father dies and leaves her £2k a year she attracts the attention of the younger Ashford son, Oliver (James Norton, Rush, An Education), even though she experiences a growing attraction to an idealistic vicar's son, James Davinier (Sam Reid, The Railwayman, Anonymous) intent on the truth of what happened on the slave ship, the Zong.

This is a fascinating piece of history and this film captures the impact of slavery upon the lives of all manner of people and the restrictions of class in British society, for example, the cruelty of Belle being unable to dine with her relatives when guests came, to the desperation of a woman without fortune being forced to marry a man of fortune who more often than not, she had barely met (Elizabeth).  The richness of the time is captured beautifully by the Director Amma Asante Pedersen (A Way of Life, Grange Hill) and the writer has given this film, which could so easily have been a run-of-the-mill costume drama, some bite.*

The movie leaves you with uncomfortable thoughts on how much or little we have moved on from these days in terms of both equality for women and different races/classes.

Trivia: Guru Mbatha-Raw was attached to the film for the seven difficult years it took for development.  What is right can never be impossible was something Director Asante's father used to say to her.  After 18 drafts and 3 years of hard work and research that led to the final script, Asante was stripped of the Writer credit by Misan Sagay (The Eyes Were Watching God, The Secret Laughter Of Women), a US woman she had never met or worked with, who took this entirely British film to her US union (The WGA) in order to claim sole writing credit for the work.  She had tried to write a screenplay using some of the same history for the same producer, even though her work was abandoned. Because of a prior contract with HBO to develop the story, the WGA ruled that their member solely wrote the script, even though she didn't even contribute to it - this was largely because the director is not a WGA member (she is a WGGB member instead, as she's based in Great Britain).