Here is the next in my series of reviews from the 2014 Harrogate Crime Writing Festival, the Linda La Plante event which took place 1t 9am on Saturday 19 July: 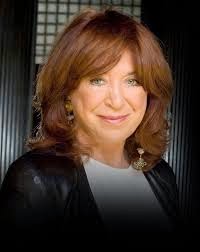 A prolific novelist and screenwriter, Linda La Plante CBE's breakthrough came in 1983 with the television series Widows.  Her award-winning career since includes a string of best-selling novels and hit shows, such as Trial and Retribution and, of course, Prime Suspect, which introduced the public to the instantly iconic and hugely influential character of Helen Mirren's Detective Jane Tennison.  Famous for her meticulous research, in 2013 La Plante became the first non-scientist to be awarded an Honorary Fellowship with the Forensic Science Society, while this year she announced plans to return to her most famous character in the novel Tennison, a prequel to the Prime Suspect series.  Linda was in conversation discussing her career and her latest book Twisted with Callum Sutherland, Vice President of the Forensic Science Society.

In this informative and hilarious event, Linda La Plante revealed that she got into RADA but she didn't think she was any good, it was too much for her at just over 15 and she 'corpsed' a lot.  She appeared in Sweeney, Professionals and The Gentle Touch and feels she got everything Felicity Kendall turned down!  She was doing The Gentle Touch when she remembers Gill Gascoine's son and daughter receiving these tapes and her line was 'why don't you call me Juanita' but by the 16th take she was still busy laughing so suggested changing the name to Margaret.  Then came Widows about women doing armed robbery.  She pencil scribbled this and thought, this is brilliant.  She suggests work your treatment, journalists can bang out a story and bang your headline, but the key is to get in.  She put down her married name and Verity Lambert who had know idea who she was agreed to commission one episode and if it was not good enough, they would bring on another writer.

She has done a lot of scripts and she went to the source, police stations, women's prisons and when she was out of work she did a vegetable stall in Lambeth, the stall next to a woman who's husband was doing time for murder.  But at home this woman was so different, in a fabulous house dressed in a Jaeger suit, but she opened up to Linda and gave her visitation rights to her husband and she knew she had the character of Dolly.

Every film unit has got a 'off the back of a lorry' person who could introduce you to a villain and there was this one case where the body got fed to some pigs and her contact took her to the pub to meet John, because he'd done it!  When she did Prime Suspect, she went deeper into police work and crime.  Widows was a phenomenal success and from then on, she was only offered something similar.

The BBC were to do a series called Civvies and the editor called her in and said they were looking for something and wondered what she'd got.  She said a female high-ranking plain clothes police officer attached to the murder squad (this was Prime Suspect).  They asked her for a treatment and she asked, how long would you like it?  So she got down to research and rang the Metropolitan and a police officer answered the phone, but a DCI helped her to get it right.  She taught her to burn her notes, to be a sponge and to show nothing (the devil is in the detail).  Helen Mirren was already a steady and accomplished actress, RSC and films, but hadn't yet done television, and she was perfect and wonderful.

Linda once did research for a movie in Russia so needed a translator, the one she got had perfect English, buck teeth and had never been out of Moscow but she refused to go into the Mortuary and said she would wait outside.  La Plante entered and there was a chute behind her, there were men wearing white wellies with beards, round women and a head mortician, but no-one could speak English.  She persuaded the translator to come in but she fainted because of the body in the room and they also had 25 bodies hung up like pigs.

Her new novel is a prequel to Prime Suspect, Jane Tennison and her young life.  She was at an event in Sheffield where some sight-impaired people with dogs were in the audience, she noticed them particularly because their dogs would slowly go to sleep whilst she talked, and one of them asked her where she (Jane) had come from and the more she thought about it, the more she thought she'd like to find out.

Writing a twisted book, a psychiatrist led her through a tunnel of plots with a good strong story.  She was made an Hon fellow of Chartered Fellow of Forensic Scientists.  She wanted to know if mother sperm and egg donation and no dna, would there be a connection if a man had gone missing and just a pool of blood was left for forensic help.  Jane is a fully formed woman in Prime Suspect, but she now has a young naive woman and needs to form an understanding of her character - she has got to 25, then she will do 30/5.  In the business they call it legs.

When asked why crime and not comedy, Linda felt that there is humour in everything and the writer side to her that nobody sees is what drives her to write/explaining victims, Charities, based on this as she doesn't think victims of crime ever have enough help.  Myra Hindley had guitar lessons and was a qualified psychologist in prison, but the Mum of one of her victims has haunted the moors with flowers looking for her sons body; there is never any help for her.

Linda feels she never procrastinates as she is an inquisitive person.  She saw a typewriter in a shop, and wondered if it was because a spy uses it who does not want to be traced via computers.  When she looked at what the person had typed, it was 'I loved her' over and over again.  She is a sponge and has always got about 10 things on the go.  People buying books and being commissioned (8/9 books before this happens) and the heartbreak is in not getting it out there, but she feels that rejection does not mean no, she would tour the country and talk to young writers to help them understand this.

Police are now even more eager to help as she is a writer and wants help, they give their time and talk her through procedure though it has all changed from 10 years ago, but she suggests finding your nearest murder team and talking to them.  Toxicology takes time, it took 3 weeks for Peaches Geldof heroin use to come to light.

When asked about the CSI effect and whether criminals watch it, she gave an example of a criminal throwing a knife onto a frozen lake, but burning all the other evidence.  She also said she wouldn't write now about the Madeleine story as she wouldn't want to do anything that is going to wound when it comes out.  She only wrote about one child murder, but she couldn't do it again because of the pain.  She has never met a policeman who has not been affected by a dead child and the pain never ends.

She laughed that the children's show Rentaghost is going to haunt her (she was an out of work actress and she was the nurse that disappears when the umbrella goes up) and there are so many countries it was shown in, Japan, Stockholm, Germany, where she gets asked if she was in it.

This was a fabulously funny event and I recommend if you ever get the chance to see Linda La Plante, don't miss it.