James is a leading Leeds-based poet and writer and his workshops are always informative and inspiring.  The theme for the workshop was Remembrance as Brighouse Library have a number of events commemorating the first World War.

As part of the workshop, James had brought along some interesting artefacts from the war including a prototype 50 medals of honour cornet/trumpet made by Besson and Company, Euston Road, England, a couple of pictures of a couple from the war and a suitcase with the initials E.C. S. emblazoned upon it.  All of the objects had stories to tell and we were eager to make them up.

The suitcase in particular was chosen to inspire and though it had leather fittings, it was made of cardboard.  It had a lock that snapped with satisfaction and an old 1976 copy of the Yorkshire Post within it.  Who was E.C.S., where was s/he going and what memories would the suitcase hold?

Two war poems were shared, one was Anthem for Doomed Youth by Wilfred Owen and the other, Here, Bullet by Brian Turner who was a soldier in the Gulf War.  Both were very powerful and we were given a copy to keep.

James felt that inspiration can come from anywhere, be it a conversation on a train, something spotted from a bus window or something someone tells you.  He has interviewed Chris Ryan for the Ilkley Literature Festival on his experiences in the Gulf War and his father said that it was an ignoble thing that sometimes had to be done.

We were asked to make an attempt to describe the suitcase physically using the five different senses (though taste was sensibly left out as the suitcase smelled decidedly foisty)  to convey an essence of something and after doing so, we were asked to try and creatively answer the question 'Who did it belong to/who was E.L.C.?'

I came up with this short passage that I then used to craft a poem:

He stood on the edge, the pavement calling him forward but the sounds staying him.  Gripping the handle, he fingered the rip on the inside, a reassurance that some things were the same.  Something he could control in this point of no return.  Thin body stripped of innocence, noises in his head and scars on his heart that would never heal.  He had returned, but to what?  The guilt of being one that came home.

Then we were asked to consider the memories the suitcase might contain and what triggers like scent or music there may be.

Following this exercise James asked us to consider what journeys the suitcase had made, what had been its biggest?

For the final exercise, we were asked to underline any powerful phrases that we may have written in our creative pieces and use them to consider what we want to say about the suitcase and what it represents.  For example, the trumpet could be a metaphor for a relationship or the suitcase used to describe a journey/memory.

At various points in the workshop, the group shared their work and there were some very beautiful, powerful and poignant imagery produced.

At the end of the workshop, we were told that Brighouse Library would like to produce work from the event and James generously offered to look over our work prior to us sending it to them for consideration.  I will, of course, let you know if any of the poems/prose are chosen.

James was recently asked to work on an anthology of poems, entitled Stokes, for the Grand Depart and his new book of sonnets, Some Things Matter, is available to buy now: http://www.amazon.co.uk/Some-Things-Matter-63-Sonnets/dp/1908853042 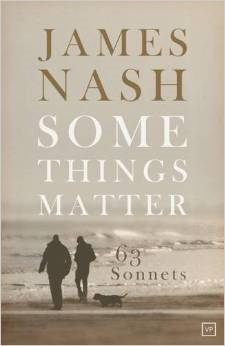 If you wish to read more about James, please check out his website www.jamesnash.co.uk where you will find details of his upcoming writing events.  Details of further events as part of the 2014 Brighouse Festival, 15-20 September, can be found at www.brighousefestival.co.uk.