What We Did On Our Holiday preview film review 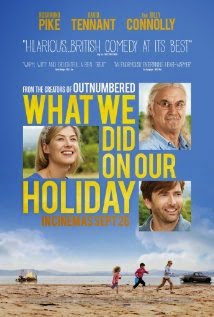 Thanks to seefilmfirst, my husband and I went to see this preview screening at Huddersfield Odeon this morning.  We were expecting cheese, but were hoping it would be of the mature variety and off the back of our recent viewing of fantastic British film Pride, we had high expectations of more of the same.

IMDB says: Explores the meaning of life and suggests how best to live and love.

In this Andy Hamilton (Not the Nine O'clock News, Drop the Dead Donkey) and Guy Jenkin (Outnumbered, Drop the Dead Donkey) written and directed film, David Tennant (Dr Who, Broadchurch) stars as Doug and Rosamund Pike (Jack Reacher, Die Another Day) as Abi, a couple in the middle of a divorce, who are trying to fake being together for their sake of a dying relative, Gordy McLeod, played by an excellent Billy Connolly (Mrs Brown, Gulliver's Travels).  Their children, Lottie (Emilia Jones: One Day, Utopia), Mickey (Bobby Smalldridge: Agatha Christie's Marple, Foster) and Jessica (Harriet Turnbull) are supposed to keep up the lie, but are in fact their biggest liability.

In this uneasy truce, they must travel to Scotland and spend the birthday weekend with Doug's brother Gavin (Ben Miller: The Armstrong and Miller Show, Johnny English) and Sister-in-Law Margaret (Amelia Bullmore: Scott and Bailey, Mrs Dalloway) and attend their father's 70th birthday party.

When the other adults are too busy fighting amongst each other, Gordy takes the children out for the day, introducing them to his friend, the magnificent Annette Crosby (One Foot in the Grave, Calendar Girls), a relaxed time playing on the beach and pushing their boundaries of what they are allowed to do as children by teaching them to drive, but tragedy strikes, leading to more than just their parents secret being revealed.  Throughout, Gavin and Margaret's son Kenny (played by newcomer Lewis Davie), who seems oblivious/zen about the familial complications, finds love and acceptance with a fellow musician.  There is even a lovely turn from the fabulous Celia Imrie (The Best Exotic Marigold Hotel, Bridget Jones).

The three main leads, Connolly, Tennant and Pike are very strong, and the three children are fantastic, we were amazed that they did so well with such complicated material without the scenes dissolving into farce, these are three to watch.  Connolly nails his role, lovingly realistic of a man letting go of hurts and appreciating the little joys in life for the time that he has remaining.  Tennant's character starts off determined and controlling and turns slowly into a man drowning in the realisation that his mistakes may have just lost him his children.  Pike's Abi is a woman determined to talk her way out of every situation, going from placation to manipulation in her desperation, feeling that she is doing the best for her children, yet blind to the damage that is being caused.

This is a beautiful little film, with outstanding acting, that at times pulls at your heart strings and makes you laugh out loud, but it deals well with the consequences of lying, not appreciating those you love and modern relationships, with the wonderful backdrop of stunning Scottish scenery.