The Time of Their Lives film review 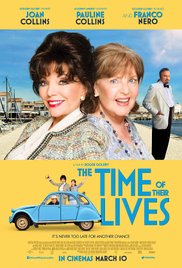 Saw this at the Leeds/Bradford Odeon with my friend Sarah.

IMDB says: A former Hollywood star enlists the help of a new friend in order to journey from London to France for her ex-lover's funeral, with the various mishaps en route making the trip unforgettable.

In this Roger Goldby (Cutting It, The Waiting Room) written and directed film, Joan Collins (TVs Dynasty, Empire of the Ants) stars as former Hollywood siren Helen and Pauline Collins (Shirley Valentine, TVs Mount Pleasant) as unhappily married Priscilla, who embark upon a trip to France for Helen's ex-lovers funeral.  Priscilla meets Helen on the anniversary of her son's death when she goes shopping with her controlling husband Frank (Ronald Pickup: The Best Exotic Marigold Hotel, Lolita) and Helen, who is about to embark on a retirement home trip to the seaside, commandeers her to help with her bags.  As Priscilla is a fan she helps Helen and boards the coach with her bags, but gets stranded on it when it sets﻿ off with her, leaving her seething husband behind.
Narcissistic kleptomaniac Helen convinces Priscilla to accompany her on the trip to France where they meet Italian artist Alberto (Franco Nero: Django, Django Unchained), who begins to woo Priscilla, much to Helen's chagrin, and she starts to see what her life could have been like.
The film tries to be a cross between a funny road trip, like an OAP Thelma and Louise, and a serious journey of self discovery, similar to Shirley Valentine, but as it falls between the two camps it ends up being a lacklustre buddy movie with an unbelievable storyline.  It felt like the plot and theme lost its way several times and some aspects, like the brilliant acting turn by Joely Richardson (The Girl with the Dragon Tattoo, TVs Nip/Tuck) as Lucy for example, were wasted as it went nowhere.
It has some touching moments, particularly when Priscilla and Alberto connect, and there were some moments of humour that weren't into the realm of ludicrous, but sadly it was not the comedy expected from the trailer nor the emotional journey it probably was trying to be.
I am aware that I am younger than the audience it is aimed at, and those of the right age who remember Franco Nero at the height of his fame, such as my friend Karen, enjoyed the film, so if you fall into this category you should give it a try.  But my friend and I were disappointed that it was so disjointed.
Tagline: It's never too late for another chance.                                                        5/10