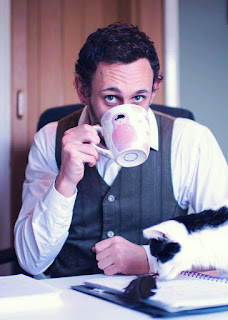 Known by some as a novelist and others as an LGBTQIA activist, Steve Williams is a fresh new face on the spoken word scene but is already making an impact through the north.  "His poems masterfully blend the personal with the political, and his words have such a command over you that you sometimes forget to breathe." (Matt Abbott)

The evening started with an open mic featuring poems and a short story ranging from a wedding poem to a monstrous tale of face stealing featuring several poets including Trevor, a local Castleford radio presenter.  After a short break for refreshments Steve took to the stage and shared some of his truly emotive poems.  Taking inspiration from life and therapy, there were several times that I had to fight back the tears, particularly the ones with a cancer theme as I could totally empathise, as no doubt other audience members could too.  It wasn't all sadness though as interspersed throughout we had an action poem featuring a family dog, a love poem to both his partner and Dr Who, and a poem about his unusual cat (not so unusual as it turns out, as I have one just like it), which I could completely relate to.  Finishing with a disturbing yet hilarious poem about a journey on the 268, featuring a lady with a baby, an old woman who communicates her displeasure with a cane, a Polish music fan, and a man suffering from self-cannibalism!  Hugely entertaining set from a polished performance poet.


Rarely does a story about monsters and unknown creatures blend a horrifying and unconventional world with verisimilitude. Many try, but most fall short in one area or the other, because it requires such grace to achieve.  Book One of Steven B. Williams’s creation of the Umbraverse, Heartsnare, accomplishes this feat and leaves you waiting in anticipation for Book Two.Damian Serbu for Lambda Literary 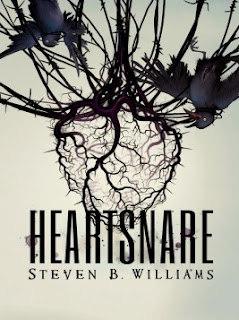 There will be another Poetry & A Pint Presents next month, details to follow when I receive them, where I hope to be an open mic poet for the first time.