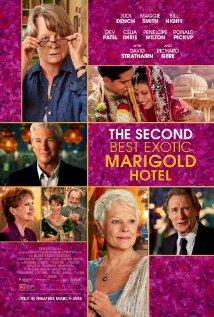 Went to see this yesterday at Leeds/Bradford Odeon, having enjoyed the first movie.

IMDB says: As the Best Exotic Marigold Hotel has only a single remaining vacancy - posing a rooming predicament for two fresh arrivals - Sonny pursues his expansionist dream of opening a second hotel.

When Sonny and Muriel try to do a deal with American hotel magnate Ty Burley (David Stathairn, The Bourne Legacy, Alphas), they know that an undercover inspector will be coming to stay to evaluate them.  On the same day, newcomers Lavinia Beech (Tamsin Greig, Shaun of the Dead, Tamara Drew) and Guy Chambers (Richard Gere, An Officer and a Gentleman, Pretty Woman) arrive and Sonny convinces himself that the inspector must be Chambers.  Trying hard to impress, he even tries to set up his mother (Lillete Dubey, Monsoon Wedding, The Lunchbox) with him when he takes a shine to her.  Meanwhile, his best friend and perceived rival Kushal (Shazad Latif, Toast of London, We are Monster) buys the hotel he had his eye on for the second best exotic marigold hotel.

The film is beautiful in its stunning location, full of colour, and realistic in its portrayal of the older generation, rather than static caricatures that seem to be the main-stay of comedies more often than not, and the acting is superb (as it should be with such a fine cast), but for me, this is sub-par to the original.  I could guess all of the twists before they came in the lacklustre plot but it was still a nice way to spend just over 2 hours.  I did enjoy the choreographed dancing at the wedding and am hoping that this is typical of an Indian wedding (having not been lucky enough to attend one).  Fingers crossed :)