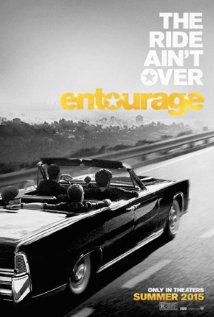 Went to see this film with my family this evening thanks to seefilmfirst at the Showcase Cinema, Birstall.

IMDB says: Movie star Vincent Chase, together with his boys Eric, Turtle, and Johnny, are back - and back in business with super agent-turned-studio head Ari Gold on a risky project that will serve as Vince's directorial debut.

Having never seen the 2004 television series, we all came at the movie without any preconceptions or knowledge of the characters and I am guessing that this will be rare for the audience expected for this film.  Because of this, we were a little confused at the beginning as we had none of the back story to the characters and took a little while to understand what was going on and how the main people fit together.

When the film needs a little extra money to edit, Ari has to head to Texas to speak to the financiers Larsen McCredle (Billy Bob Thornton, Armageddon, Bad Santa) and his son Travis (Haley Joel Osment, Sixth Sense, A. I. Artificial Intelligence) to convince them to bankroll once more.

With amusing sub-plots such as Eric's love life, Ari's anger management and an unfortunate incident with a video phone for Drama, plus plenty excellent cameos including Liam Neeson, Mila Kunis, Mike Tyson and Jon Favreau, this is an easy way to spend 104 minutes.  There is no need to follow a complicated plot and it is not hard to guess everything that is to come, but with tons of gratuitous nudity and sex, I think this is aimed squarely at the male audience.  Who knows if this sort of thing does go on in Hollywood, but it definitely plays into the stereotype.

Trivia: Mark Wahlberg produced the film and states it is loosely based on his life, Kevin Connolly broke his leg while filming a football scene in the film, in the movie Ari refers to Travis McCredle as 'Forrest Gump Junior' and Haley Joel Osment who plays Travis did play Forrest Gump's son in Forrest Gump, and the film reunites Osment and Adrian Grenier fourteen years after A. I. Artificial Intelligence in which Haley stars and Grenier had a minor role in the car scene.