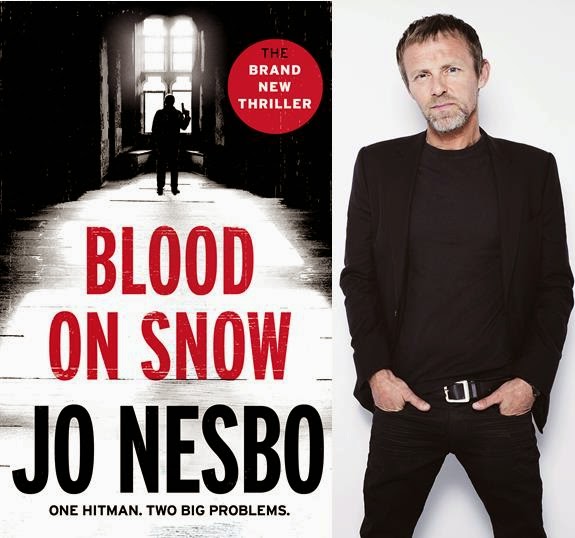 Attended the Harrogate International Festivals Jo Nesbo event last night with my Mum.  The event was billed as follows:

Jo Nesbo – the number one best-selling author of the Harry Hole crime fiction series set in Oslo – visits Harrogate for the publication of his new thriller, Blood on Snow. Join the crime writer, rock star and former professional football player at this exclusive pre-publication event.


Jo will be interviewed by acclaimed broadcaster, Mark Lawson, they will be discussing his new thriller Blood On Snow, his globally popular Harry Hole books, soon to be turned into a film, and much more.

Don’t miss this special evening with the King of Scandinavian crime, and your chance to be one of the very first to get your hands on a copy of Blood on Snow as it is not officially released until the 9th April. Jo Nesbo will also be signing books after the event, and books will be available to buy on the evening from the on-site bookstore provided by WHSmith.

Jo was sporting some very Bono-esque shades due to an eye inflammation and he was being interviewed by Mark Lawson.  Mark started by asking Jo about the book 'The kidnap of Tom Johansen' that he came up with the idea of when he was picked up from Toronto by a limo with two Russian gentlemen and it occurred to him how easy it would be to kidnap someone this way.  In his story an out-of-work insurance salesman whose wife is expecting comes up with this plan to earn money because he dare not tell her that he has been fired, for fear of her miscarrying.  He is the most unlucky guy because he kidnaps Tom, a writer who had minor success with Blood On Snow in the 70s in the United States and the express kidnapping (where the hostage is taken to the ATM, pays and then is released) goes wrong as he hears his name on the radio because he has gone missing and refuses to be released.  Jo had the idea of creating a background for this character using Wikipedia and writing and releasing the book under the pseudonym, but the lawyers got involved and this was not possible.  The book 'The Kidnap of Tom Johansen' should be released next year or the year after.

Jo feels the book is an on-the-page homage to the Film Noir of the 40s and the 50/60s hard-boiled U.S. crime fiction, like Jim Thompson, so he set the book in the 70s.  The hit man of the novel falls in love with his intended victim, the wife of his boss whom he suspects is cheating on him, which is a bad career error.  The hit man had a working class background but then when his criminal father is released from jail, he is forced to give up his dream of going to University and instead enters a life of crime, like his Dad.

Mark and Jo then discussed what it is that makes criminals do the things they do and Jo thought the scene in Christopher Nolan's The Dark Knight where they try to explain the Joker's motives and say that 'Some people just like to watch the world burn.'  He also said that the 80s movie The Warriors summed it up too, there is a peacemaker who is trying to stop rivals gang warfare and someone shoots him.  At the end of the movie when someone questions the motive for shooting the peacemaker, the killer says 'I don't know, I just like doing things like that.'

Jo has an upcoming TV series Occupied about the Russians invading and occupying Norway, but the world being okay with it as they are working with the UN to keep Norway producing oil.  He revealed that he has lots of plots, his frustration is that it takes so long to write a book.  He has notebooks full of synopses of ideas and he takes 6 months/a year to work on them.

The floor was then opened up to questions, in which it was revealed that Jo was the lead singer and songwriter of a band that got to number 1 in the 90s in Norway.  The band would play for free in the club and they would change the name of the band every week because Jo said they were that rubbish, but after 2 years they got better, so they changed their name to 'Those guys' in Norwegian because people would come and ask if those guys were playing!  They got one of their songs on a TV programme and then Universal Records signed them and their 2nd album got to number 1.  But in 98 as he was writing a song, he realised he didn't have any more ideas for songs, so that was the last song.

Harry Hole was so named because Harry was his favourite football player and Hole was the name of the police officer in his Gran's village that she used to say to Jo and his brother that if they were not home and in bed by 8pm, he would come and get them.  When asked who he would want to play Harry Hole in a movie, he thought that Nick Nolte was the closest in looks.  He revealed that he does sometimes get exhausted by being in Harry's world and it makes him want to do something else for a while, so he writes children's books as well.

Jo believes that the story has a certain logic and gravity and he has to stay true to the character.  He feels the Harry Hole series is a tragedy and it can't have an American movie-style happy ending, but there will be more Harry Hole, though he hasn't started one yet, he has written the storyline.  It was revealed that Martin Scorsese is going to produce The Snowman with Tomas Alfredson (Director of Tinker, Tailor, Soldier, Spy and Let the Right One In).  Jo feels he writes entertainment, like art and politics are entertainment.

This is his 4th time at the Theakstons Old Peculier Crime Writing Festival and as a writer he feels was inspired by Jim Thompson, Ernest Hemmingway, Charles Dickens and Mark Twain.  His Mum is a librarian and his Dad a keen book reader, who read to him.  Mark feels that Jo's work is influenced by Ibsen, in that the truth is hidden then rises to the surface.

When asked if he has a special room to write in, Jo said that he has an Oslo apartment that has a great view of the Norwegian hills with a big heavy desk to write on, music to listen to and a coffee machine and big computer nearby, but that it is the only place in the world that he finds it impossible to write.  He goes instead to a tiny coffee shop, fights/waits for his favourite table and this is where he most likes to write, but he can write on trains and planes.

Jo revealed that Patti Smith will be narrating the audio book of Blood on Snow and that when he used to be asked by teachers in school to write an essay on a nice day out in the woods, in his stories nobody would come back alive.  But then his teacher would worry and call his Mum to check how he was doing at home.  He did have nightmares as a child, but not now.  He couldn't watch horror movies, same with his brother who was 5 years older and he recalled a time when he went on a date to the movie when he was 14/5 and he and his brother would sit with their eyes covered and his date would then describe what was happening.

When asked what TV he enjoys as he doesn't read much crime, The Fall was recommended to him, though it is controversial, but he revealed he enjoyed The Wire.

The evening finished with a book signing.