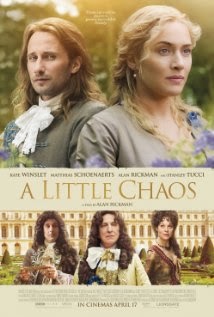 Went to see a preview of this film today at Leeds Showcase with my daughter thanks to seefilmfirst.

IMDB says: A female landscape-gardener is awarded the esteemed assignment to construct the grand gardens at Versailles, a gilt-edged position which thrusts her to the very centre of the court of King Louis XIV.

There is much beauty in the scenery and colours spun in this romantic drama, the costumes and interiors rich in splendour.  The acting is fine as this is a superb cast led by the three main leads.  Stanley Tucci (The Hunger Games, The Devil Wears Prada) is fabulous as Philippe, Duc d'Orleans and Helen McCrory (Skyfall, Hugo) is perfect as spiteful Madame Le Notre.  Jennifer Ehle (The King's Speech, Zero Dark Thirty) also appears as Madame De Montespan, Danny Webb (Locke, Valkyrie) as Moulin and Adrian Scarborough (Les Miserables, Notes on a Scandal) as Daniel Le Vielle.

Trivia:  In a scene where Sabine wanders into a room at the Louvre, the young girl sat alone on a chair is Winslet's own daughter Mia.  This is the second film Rickman and Winslet have starred in together (Sense and Sensibility).  Winslet was three months pregnant when she completed filming at Blenheim Palace.