As promised, the second in my series of blog posts running through the day to day schedule of the Cleckheaton Literature Festival, here is what the second day will feature:


10-12               John Irving Clarke (Poetry children’s event)
John Irving Clarke's poetry workshops begin with the primacy of rhythm, they explore the magical possibilities of metaphor and they emphasise the pleasure to be gained from making meaning with words. At the end of each workshop participants see the world a little differently. Or more succinctly, John's workshops involve playing with words and having fun. 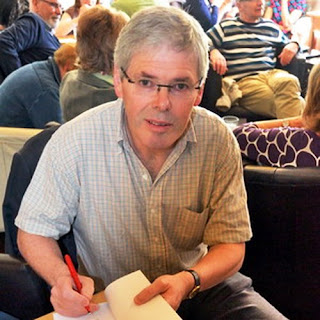 John Irving Clarke
First published in Raven magazine in 1980, John Irving Clarke has since had poems published variously and stories broadcast on BBC local radio. As well as appearing in the magazines, Scribble and Yorkshire Ridings, his short stories have also been short-listed in the Writers' and Artists' Short Story competition 2015 and Magic Oxygen competition 2016. His novel, Who the Hell is Ricky Bell?, a tale of redemptive love, was published to some acclaim in 2014.
John tutors an adult creative writing group, visits schools and reading groups to lead workshops and spends a disproportionate amount of time agonising about the plight of Carlisle United and staring out of windows. His lives in Wakefield with his wife where they plot visits to see their son in Michigan
John Irving Clarke (Poetry) children to be invited from local schools – Poet, short story writer and YA novelist.  Writing, creative arts and spoken word workshop leader.  All workshops geared towards taking pleasure and boosting self esteem through creative expression. www.authorsalouduk.co.uk/john-irving-clarke Poetry workshop.

This workshop will give tips and recommend tools for working on narrative structures of any length and format with time for Q&As on any writing problems that you may have.  You are encouraged to bring stories you are working on with specific issues which can be discussed, Justina will be bring her current WIP as an example to explain what has been changing in it. 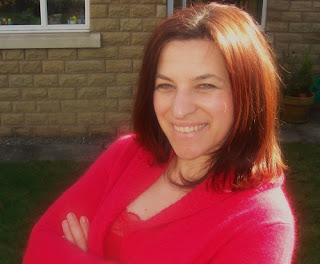 Justina Robson was born in Yorkshire, England in 1968. After completing school she dropped out of Art College, then studied Philosophy and Linguistics at York University. She sold her first novel in 1999 which also won the 2000 amazon.co.uk Writers’ Bursary Award.
She has also been a student (1992) and a teacher (2002, 2006) at The Arvon Foundation, in the UK, (a centre for the development and promotion of all kinds of creative writing).  She was a student at Clarion West, the US bootcamp for SF and Fantasy writers, in 1996.
Her books have been variously shortlisted: for The British Science Fiction Best Novel Award, including the 2015 for her latest novel "Glorious Angels",  for the Arthur C Clarke Award, the Philip K Dick Award and the John W Campbell Award.  An anthology of her short fiction, “Heliotrope”,  was published in 2012.  In 2004 Justina was a judge for the Arthur C Clarke Award on behalf of The Science Fiction Foundation.
Her novels and stories range widely over SF and Fantasy, often in combination and often featuring AIs and machines who aren’t exactly what they seem.  She is the proud author of "The Covenant of Primus" (2013) - the authorised history and 'bible' of The Transformers.
She lives in t’North of England with her partner, three children, a cat and a dog. 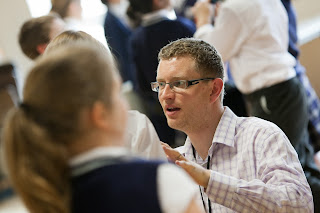 Poetry performed by Conrad, stories told by Conrad and a chance to write your own poem, followed by Q & A with Conrad and opportunity to get signed copies of Conrad’s books .
Conrad Burdekin is a local author, poet, and storyteller. He is hugely popular in Yorkshire’s schools and brings laughter and enjoyment wherever he goes. His poems and stories range from topics such as teachers picking their noses to grandmas flying into outer space, with plenty of silliness in between. He cites Roald Dahl and his Year 4 teacher Mrs Johnson as his inspiration, although he admits that sometimes crazy ideas just pop into his head without even asking. He used to work in a dark, cold cellar with slugs, but now he works in the corner of his dining room and is happy not to have seen a slug in ages. Conrad has three daughters, one wife, three guinea pigs, and a mum who continues to crop up in his work.
7-9                   Luke Wright (performance poet) What I learned from Johnny Bevan 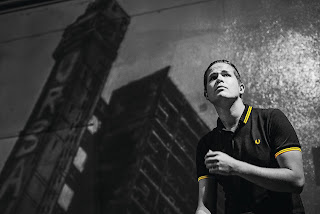 Luke Wright and Paul Jellis present
What I Learned From Johnny Bevan
Written & performed by Luke Wright
WINNER Fringe First Award for new writing
WINNER The Stage Award for acting excellence
A story of shattered friendship, class ceilings, and the hollow reality of the New Labour dream.
At university the whip-smart, mercurial Johnny Bevan saves Nick, smashing his comfortable, middle class bubble and firing him up about politics, music and literature. Twenty years later, as their youthful dreams disintegrate with the social justice they hoped for, can Nick save Johnny from himself?
Luke Wright delivers a multi award-winning hurricane of a performance. With humour and humanity he takes British politics head on, challenging the rise of New Labour, David Cameron and the abandonment of those left behind.
"Pulsating, neatly handled piece of poetic storytelling” ★★★★ Lyn Gardner, Guardian
“Blistering … a story of our times … a strikingly assured performance of a compelling piece of writing.” ★★★★ Scotsman
"This is such a rich piece of writing... resonant and timely.” ★★★★★ Exeunt
Co-commissioned by Norwich Arts Centre and Writers’ Centre Norwich

For tickets and information on all our other great events: www.ticketsource.co.uk/cleckheatonliteraturefestival
Posted by Karen Naylor at 10:12