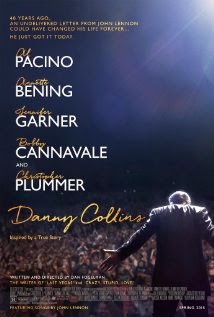 Went to see this preview film this morning with my husband at the Pictureville Cinema, at the National Media Museum, Bradford, thanks to seefilmfirst.

IMDB says: An aging rock star decides to change his life when he discovers a 40-year-old letter written to him by John Lennon.

In this Dan Fogleman (Tangled, Cars) directed and written film, Al Pacino (The Godfather, Scarface) plays Danny Collins who has an epiphany when he receives his long-lost letter from his Manager and best friend Frank Grubman (Christopher Plummer, The Sound of Music, A Beautiful Mind).  Quitting his tour, his ridiculously young girlfriend Sophie (Katarina Cas, The Wolf of Wall Street, The Guard) and his lavish lifestyle, he retreats to rediscover the family he chose to forget.

Pacino is magnificent in this moving and heartwarming film, and there are moments of genuine humour and sadness mixed in this 'shouldn't be believable' film.  Inspired by a true story (Steve Tilson the singer who found a 40 year-old letter from Lennon), the movie could have gone down a cheesy and predictable road, but instead chose to play it true to the essence of the letter in question.  All the performances are outstanding and there is credible chemistry between all the leading players and the leading man Pacino, i.e. Bening, Cannvale, Plummer and Garner.

Trivia: Julianne Moore and Jeremy Renner were originally cast, before Bening and Pacino took the roles, and Warner Bros originally wanted Steve Carell before the project turned around.