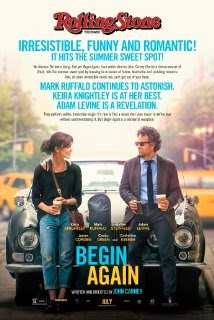 Went to see this movie with my friend B at the Leeds/Bradford Odeon yesterday.

IMDB says: A chance encounter between a disgraced music-business executive and a young singer-songwriter new to Manhattan turns into a promising collaboration between the two talents.

In this John Carney (Once, On The Edge) written and directed film, Keira Knightley (Pride and Prejudice, Never Let Me Go) stars as Gretta, a songwriter who comes to Manhattan with her boyfriend Dave Kohl (Adam Levine, Love Actually, The Karate Kid and lead singer of Maroon 5) who has just had his big break in the music business.  When things turn sour between them, Gretta seeks comfort from her friend Steve (James Corden, One Chance, The History Boys) who takes her to a talent night to cheer her up and encourages her to get up on stage and play one song.  Dan (Mark Ruffalo, Avengers Assemble, Now You See Me) a down-on-his-luck music producer is in the bar and he instantly recognises her potential and they forge an unlikely collaboration and friendship.

All the actors are exceptional in this film and the songs are so catchy, you will find yourself wondering at the end of it if you can buy the soundtrack.  It is a lovely movie, where they thankfully stay true to the characters and don't try and force romances that aren't there.  The sub-plot with Dan's family is also beautifully executed and Hailee Steinfield (Ender's Game, True Grit) as Violet is convincing as a troubled teenager who is struggling with her strained relationship with her father and trying to block out the friction between her fighting parents (Catherine Keener, Captain Phillips, Into The Wild, is spot on as her Mum Miriam).

A beautiful and warm little film.

Trivia:  Ronan Keating of Boyzone auditioned for the part of Dave and Scarlett Johansson was cast as Gretta, but dropped out.  Knightley's musician husband James Righton offered to help her learn the guitar for the part.  The café scene with Dan and Gretta features a cameo in the background from Knightley's mother Sharman Macdonald as a customer at the table behind them.